4 lessons we learned from SpaceX

Congratulations to SpaceX on the successful launch of Falcon Heavy! Recticel and its subsidiary Soundcoat in the US are proud to have played a role in this historic event. SpaceX is not just an important client but also a huge source of inspiration for us. Here are just some of the lessons we have learned from working in partnership with this visionary company. 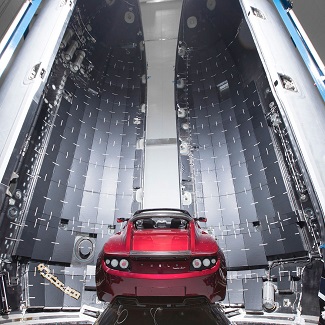 1. Go outside your comfort zone

Elon Musk is not just the face of SpaceX. He is its founder, CEO, lead designer and central motivation. His relentless ambition and creativity are matched by confidence, hard work and uncompromising standards. Musk is not afraid to demand the most from his employees because he himself gives everything. In the words of Dolly Singh, the former head of talent acquisition at SpaceX, “He pushes himself harder and harder and he pushes others around him the exact same way. So if you work for Elon you have to accept the discomfort. But in that discomfort is the kind of growth you can’t get anywhere else, and worth every ounce of blood and sweat.”

2. Do not go incremental when you innovate

SpaceX as repeatedly attracted worldwide attention for a series of historic milestones. It is the only private company ever to return a spacecraft from low-Earth orbit. It made history again when its Dragon spacecraft first delivered cargo to and from the International Space Station. In 2017, SpaceX successfully achieved the first re-flight of an orbital class rocket – a historic milestone on the road to full and rapid rocket reusability. For the relentless innovators at SpaceX, launching Falcon Heavy, the world’s most powerful rocket, is just one more step on the road to a key goal – to develop fully and rapidly reusable rockets that will transform space exploration by delivering highly reliable vehicles at radically reduced costs.

Musk is open about the fact that he expected SpaceX and Tesla to fail, but that didn’t stop him trying. His unaccomplished goals include converting automobiles, households and as much industry as possible from fossil fuels to sustainable energy; implementing a new form of high-speed transportation via vacuum tube; creating a mind-computer interface to enhance human health; and saving humanity from future threats posed by artificial intelligence. His achievements are even more impressive: with no experience whatsoever, he entered two industries with extremely high barriers to entry – car manufacturing (Tesla) and rocketry (SpaceX) – and created the best products in those industries.

Test rockets are traditionally launched with an object such as a block of concrete or steel to simulate the weight of a real payload. Musk decided that SpaceX would do it differently, instead including a red Tesla Roadster ‘driven’ by a dummy named Starman, simply because a car would be much more fun and not boring. “Anything boring is terrible, especially companies, so we decided to send something unusual, something that made us feel,” he said. The first images of the electric car floating in the foreground, with the earth as a small globe behind it, astonished the world. And for many of the viewers who witnessed it, it created an unforgettable connection to SpaceX and its achievement.

The fastest way to find our products.

We use cookies to ensure that we give you the best experience on our website. These cookies perform functions like recognizing you each time you visit the site or helping our team to understand which parts of the site you find most interesting and useful. You can read more about the cookies that we use and their purposes.
Accept
More info

We do not control the destination site and cannot accept any responsibility for its contents, links or offers. The site will open in a new tab.
I agree

Recticel uses cookies to make your browsing experience easier and more enjoyable and to better match the content of its websites and apps to your needs and preferences. You can choose to block cookies, but some of our websites and (mobile) applications may not work optimally without them. By clicking 'Accept', you explicitly consent to the use of cookies in accordance with this cookie statement. You can revoke your permission at any time by adjusting your cookie settings in your browser.

For more information see the Recticel Privacy Notice, which contains information about your rights if your personal data, including use of cookies, is processed.

Our newsletter is packed with industry insights, information about new technologies and news about Recticel activities. Subscribe now to have it delivered straight to your inbox.

Please fill-out the form below and you will receive a link in your email box to confirm your subscription.

We care about your privacy. That's why we will only use your data for sending you our newsletter when you opt for a subscription. Find out more in our privacy notice. At any moment, you can access, modify or have erased your personal data by sending a request to privacy.flexiblefoams@recticel.com.